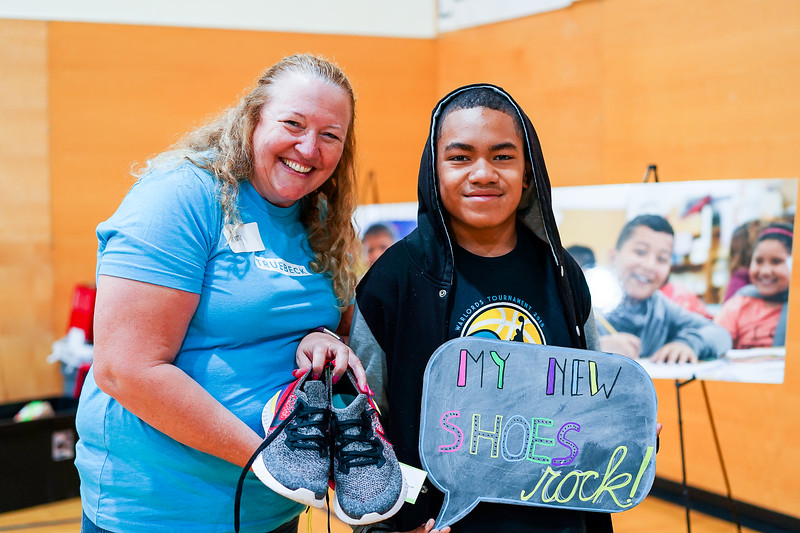 The soles of Jordan’s shoes are splitting, and it won’t be long before they fall apart and resemble flip-flops more than shoes. Jordan wouldn’t normally care but school is starting soon, and he is going into the eighth grade where his peers will see his disastrous footwear.

On August 17, My New Red Shoes hosted an event at the 49ers Academy in East Palo Alto where Truebeck’s Team for Tomorrow handed out new shoes to help children start the school year off right.

My New Red Shoes is a non-profit with over a decade of assisting children in the San Francisco Bay Area and Portland by giving them new shoes for the start of school. They have provided relief for over 65,000 homeless and low-income children. In 2017, they served 10,832 children and worked with 4,414 volunteers who provided over 8,000 hours of service. And in 2019, they’re still making a difference. Within twenty minutes of waking up, Jordan arrived at his school gymnasium to see tables covered with shoes of all shapes, sizes, colors, and brands like it was a buffet. Strangers with permanent smiles on their faces dashed around grabbing shoes and then handed them to his excited peers. Jordan knew there had to be a pair of skating shoes for him somewhere in the mix.

Jordan soon spotted his prize. At the back of a table was a pair of black Adidas with a slick white sole and laces. “They’re cool,” Jordan said. “I like the fact that they’re Adidas and look like Vans.”

“Many times, we encounter students who share that they do not go to school because they do not have clothing to wear or because they are bullied over repetition of outfits,” said a spokesperson for the Gilroy School District.

The pressure for children to succeed academically is already intense, but when coupled with the pressure of impressing classmates that weight can feel like an iron barbell on their shoulders.

Volunteers sought to alleviate that weight by providing something as simple as a new pair of shoes to give children a boost of confidence before the school year.

“We try to teach kids that it’s not what’s on the outside that matters; it’s what’s on the inside. But you know what it’s like to be a 13-year-old,” said Becca Winslow the Director of Community Engagement for My New Red Shoes. Winslow has been a member of My New Red Shoes since 2008 and has seen Truebeck volunteers return year after year. “When you look at the community, it’s magical,” she said.

Magical couldn’t be more apt to describe Truebeck’s Team for Tomorrow. Simply saying everyone had a smile on their face would be an understatement.

“My last girl hugged me,” said Victoria Viet one of Truebeck’s newest Project Engineers. “I don’t know if we’re allowed too, but she reached out for one.”

When asked why Maria Ticzon volunteered, she said, “Kindness comes back.” 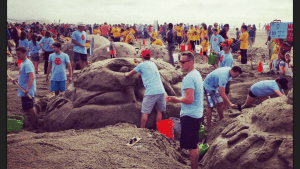 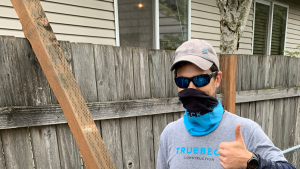 Finding Opportunities to Serve in Portland 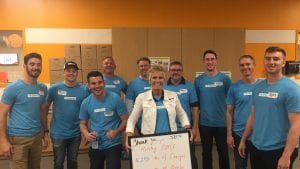